Perhaps more important than our expansive equipment selection is that our gear is all setup and operated by some of the best sound engineers and technicians in the area. We take pride in our work to ensure the job gets done right and efficiently. 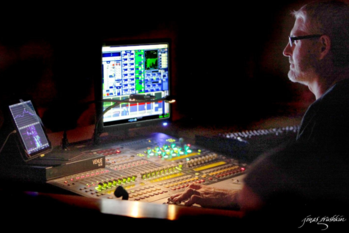 Lacey Black grew up in Durango, Colorado, where she still resides.  Her musical career began in 2000, and she still performs over 200 shows each year as a pianist and singer-songwriter.  She started SoundSmith Audio with engineer Scott "Scooter" Smith in 2016 and is currently an owner and production manager.  You'll catch her behind the board or backstage working on microphones on occasion, but for the most part, she is our logistics coordinator, meeting with the clients and laying the groundwork for a stellar show!

Lacey has been on all sides of the music business, from self-producing and financing being the studio musician or side-man.  She knows the business inside  and out and strives to make every performance, whether hers or a client's, a professional, stress-free experience for both performer, promoter, and audience.

A Colorado native, Scott (Scooter) grew up in Idaho Springs, Colorado. After finishing up at Berklee College of Music in 1989, he began his career in the audio services industry as a freelance engineer in Denver, Colorado. In 2004, Scott became a father and with that came a lifestyle change. A move was in store. Scott and his family made their new home in Durango in 2005. With SoundSmith Audio, Scott is currently the chief audio engineer at the Community Concert Hall at Fort Lewis College and is involved in several festivals such as the Moab Folk Festival, Four Corners Folk Festival and the Durango Bluegrass Meltdown.

Also through the years, Scott has lead a secret double double life as a bass player. As a member of Celeste Krenz's Goodbye Band, Scott preformed on the Tim O'Brien produced Slow Burning Flame album which reached number 11 on the Gavin Americana chart.